COVID-19 Announcement: We are currently OPEN and seeing patients although on a more limited and spread-out schedule. And, we are taking extra precautions to keep everyone safe. If you have, or recently have had any fever, cough or other respiratory symptoms please call your primary care doctor before coming to our office. We also offer telemedicine consults for herbal formulas for patients who cannot come to the office. Let’s all stay safe, and get through this together. We are happy to serve our patients during this extraordinary time! ALL CLINICAL STAFF ARE NOW FULLY VACCINATED AGAINST COVID-19.

Congee – A Simple Remedy For A Wide Array Of Digestive Ailments 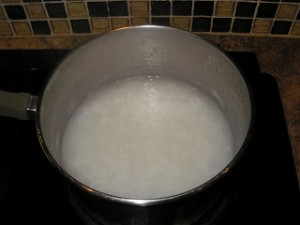 One the biggest complaints patients have when they seek Acupuncture treatment in the office in Mamaroneck is poor digestion.  This is why I am sharing this post.    All of the food you put into your mouth should work to support proper digestion.  In Chinese medicine there is an idea that you not only digest food through your digestive system but you also digest your life experiences as well.  Having a strong digestive system will make your body strong and allow your mind to be very clear.

In China one of the most common foods eaten daily by Chinese people  is called congee.   The Chinese character is  粥 and in Mandarin Chinese it is pronounced “joe”..  The basic congee is made from one part rice to eight to twelve parts water.  The rice is basically boiled until it falls apart.

The most common grain used in congee is rice.  Rice is considered the grain of the earth element. In Chinese Medicine the earth element corresponds to the spleen and stomach system.  There are many other ingredients that may be used to make congee, such as millet, wheat, barley, beans, meat, vegetables, Chinese herbs to name a few.  I am now focusing on sharing information about the basic white rice congee.

In China, congee is used to increase movement in the digestive system and to nourish and strengthen it as well. Many digestive problems may be helped with congee.  These include: bloating, constipation, stomach pain, vomiting, acid reflux, nausea and many other common digestive complaints.

Congee is also used to strengthen those who have a weak spleen and stomach or are debilitated.  This includes babies, elderly or people recovering from illness.  In China congee is usually the first food babies are given while they are being weaned from breast milk.  Mothers start feeding their babies congee after the child is about a year old.  If children drink congee in the early years of life they will be more likely to have good health as adults.  Elderly also tend to have a weakened digestive system and they would all do quite well drinking congee.  Congee can also be used for those recovering from illness to help regain their strength.  Congee prepared with other ingredients including meat, Chinese herbs, or vegetables to help speed up recovery.

Another interesting function of congee is to induce sweating for those suffering from common cold or flu.  If you have symptoms of those illnesses try drinking congee.  Sometimes it will be all you need to break a sweat to recover from the illness.

Here are directions on how to make a simple congee: 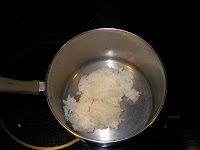 2.  Cover the rice with about twelve cups of water. 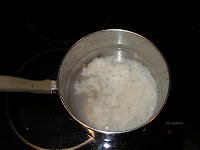 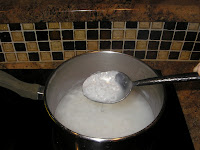 This recipe is a rough estimate of cooking times and amounts of ingredients.  Generally about 1/3 will make enough congee for about two to three servings.  You may need to make it a few times until you get it right.  It should be smooth but not too watery.  Congee is usually eaten as part of a meal in China.  Usually with some pickled vegetables, boiled eggs and steamed bread for breakfast.  For dinner it is usually eaten with steamed bread to have with meat and vegetable dishes.  There are no set rules.  You may have it with your meals or in between meals as a snack.

Generally when you drink congee it should make you feel a little warm and you may sweat a little.  Your abdomen should feel warm and relaxed.  Your mind will feel relaxed and calm.

Congee – A Simple Remedy For A Wide Array Of Digestive Ailments was last modified: October 29th, 2019 by Ira Wahrman

This article was posted in Digestive Health, Recipes. Bookmark the permalink. Follow comments with the RSS feed for this post. Both comments and trackbacks are closed.
9147724044